Everything about Internet of Things and more

Yes guys, this is MAKERbuino! MAKERbuino is a handheld retro gaming device that you can build yourself. It’s 8-bit, fun, educational and hackable. While I write this article, this super retro device is evolving, being one of the most successful growing project on kickstarter.com. It has only 18 days to go and it raised about $22,000 while the goal was $10,000. So many people waiting for such a great accessory! Let’s see what MAKERbuino can do:


What is MAKERbuino? When will be ready?

This neat little device is an open source handheld game device you can build yourself (it’s fully DIY). Besides that, MAKERbuino is also an educational device shaped like a game console. 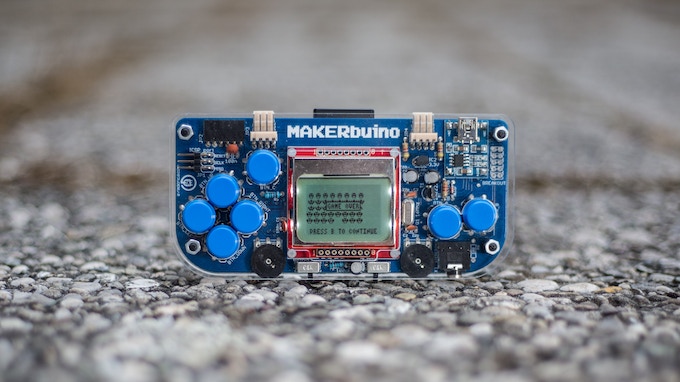 It comes in a kit form (not assembled) – you get a box with all the electronic components necessary for building your own portable game machine.
To build your own MAKERbuino the only things you’ll need are some basic tools and an interest in technology.

This device is based on easy-to-find components and programmed in Arduino – one of the most popular DIY microcontroller platforms. It’s open-source, hackable and easily customizable with additional hardware components and custom casings.

MAKERbuino is an educational device disguised in the shape of a game console. Its purpose: to motivate people to explore, learn and create something new in a fun and interesting way.

MAKERbuino’s price equals the price of an average newly released game console video game. The idea is: instead of buying your kid, a nephew, a sibling or a friend a video game, you can buy him/her a MAKERbuino for the same price and motivate him/her to learn something new and enter the wonderful world of DIY electronics.

Forget the newest iPhone or the latest PlayStation, you will be the main hipster around after you show this one to your friends – a game console you’ve built and customized yourself!
OK, it has a low-res screen and 2kB of RAM but you’ve made it with your own two hands, it’s unique, it’s retro, it’s cool.

Electronics is easy… really! We’re in the 21st century… teenagers build their own game consoles at home using online tutorials and cheap components from china. Try building your own game console, you’ll see how much fun it is.

You’ll need some basic tools and equipment for assembling your MAKERbuino:

If you’re a maker, you probably already have these tools.
If you’re a maker-to-be and still don’t have these tools, don’t worry, we’ve got you covered. We’ve prepared a special version of the MAKERbuino kit that comes with required tools included. Check out the rewards section (at the bottom of the listing) for more info about the available kit versions.

YES, we love Arduino.
MAKERbuino is based on ATmgea328p-pu – the same chip used on Arduino UNO board.
Therefore, it’s programmed in Arduino IDE (based on C/C++) – the most popular programming environment for makers.
MAKERbuino is compatible with numerous Arduino related examples of manipulating various hardware and software components. In fact, it’s compatible with all Arduino UNO software libraries available online and will work with many Arduino shields and modules with minimal or no library code modifications.

Gamebuino is like a MAKERbuino, only a bit smaller. The biggest difference: it comes already assembled and is made out of tiny components that were pre-soldered by robots. It’s an alternative for the ones that are afraid of getting their fingers burnt with a soldering iron.

Gamebuino was crowdfunded on Indiegogo back in 2014. It’s a project made by Aurelien Rodot and it served as a great inspiration for the creation of MAKERbuino.
In 2016 we connected with Aurelien (on a Maker Faire, of course) and he helped us make MAKERbuino happen.
The best thing, MAKERbuino is 100% compatible with Gamebuino’s vast collection of open-source games and its programming library.

The MAKERbuino kit comes with an SD card loaded with numerous fun retro games which you can play as soon as you assemble your MAKERbuino. More games can be downloaded from an online MAKERbuino games gallery.

Every game in the games gallery is open-source and available with a downloadable Arduino source code along with a compiled .HEX file.
In other words, you can take a look at the code of every MAKERbuino compatible game, learn something new, change the code and implement parts of the game code in your own game project.

Since i2c is serial, you can chain more than 2 MAKERbuino consoles together using link cables. Theoretically, you can connect up to 128 MAKERbuinos together and make a massive multiplayer match.

MAKERbuino has a build Guide

MAKERbuino’s detailed build guide leads you through the process of building your own game console. Here you can check out our current build guide used for beta tester kits.

We’ve designed the build guide with the purpose of teaching you something new, not only showing you how to assemble things. Every now and then, the build guide gives you some useful and educational info about the things your are doing (e.g: “Now you have to find a 10k resistor and place it on the spot marked R2. This is what the resistors look like…. Resistors are used for…. This is how you read a resistor….).

Who is this kit for?

Based on our experience, an 11-year-old kid should be able to assemble a MAKERbuino kit with a tiny bit of help from an adult. Therefore, the estimated age group is 11+.
Estimated build time: 5 hours. Build time varies and depends on the skills of the person and if the person has ever soldered before.
The build time will be significantly less if you’re a skilled maker.
Building the MAKERbuino kit is just the beginning. After that you’ll spend numerous hours creating your own games and experimenting with hardware.

This kit was designed to be assembled as easy as possible. However, if you have never soldered before, it might be a good idea to get some practice first.
Nevertheless, with enough patience and care, a total newbie can assemble this kit by precisely following these build instructions.

What you’ll learn with MAKERbuino

Let’s get down to MAKERbuino’s details!

Standard MAKERbuino kit comes with all the electronic components needed for building your own handheld game console:

MAKERbuino has a special bootloader that allows you to store and load programs from an SD card.
Unlike a regular Arduino UNO board, MAKERbuino can have multiple games and programs saved on the SD card in the form of .HEX files, which can then be selected and loaded in MAKERbuino’s FLASH memory.
Since MAKERbuino’s .HEX files are pretty small compared to an SD card’s size, you can literally store hundreds of games and/or programs on your MAKERbuino.

Every MAKERbuino kit comes with an SD card preloaded with numerous fun games and programs so that you can try your game console out as soon as you assemble it.

Sometimes sh*t happens while building stuff. You lose a component, you overheat or break something, a diode falls onto your carpet and you can’t find it anymore… We get it, that’s why we’ll give you some extra components in your kit.
If you lose or break a component which isn’t doubled in the package or if you’re having trouble assembling your own MAKERbuino kit, notify us with a polite email and we’ll send you some extra components for minimal or no cost and help you with the build process.

MAKERbuino is fully customizable. Make your game console unique. Change the button caps, craft or 3D print a custom casing, add some expansion modules and make your MAKERbuino light up with a few blinking LEDs… We can’t wait to see what your MAKERbuino will look like.

See all that pin headers on the MAKERbuino board? They’re used for connecting hardware add-ons. MAKERbuino is based on Arduino UNO. Therefore, it’s compatible with lots of hardware expansion modules. You can easily plug in some LEDs , switches and photoresistors or some more complicated modules like accelerometers, gyroscopes or RF transceivers…

MAKERbuino was meant to be hacked. Our goal is to encourage people to become creative makers and explorers of the wonderful world of DIY electronics. MAKERbuino allows you to develop your hardware and software skills. Make video games, explore new hardware solutions, learn from numerous tutorials and share your work with the community. Change the button caps, code a Pokemon-like video game, connect a GPS module, turn your MAKERbuino into a robot car…get creative.

MAKERbuino’s software is fully open-source and available for you to download.
MAKERbuino’s hardware’s schematics along with the bill of materials are also open-source and available online.
That means that you can use our documentation to build your own MAKERbuino clones on a breadboard, experiment with our hardware design using the provided documentation and schematics and create your own MAKERbuino compatible boards and modules.

We need your help to mass produce the MAKERbuino!
For over a year we have been working on prototypes, collecting feedback from beta testers and learning about design and manufacturing.
Finally, we are ready to show our project on Kickstarter and we need you to get enough orders and collect enough money to produce MAKERbuino kits for everyone.

As described in the list above, this kit comes with diagonal cutter pliers, a screwdriver, some solder, a solder sucker, and a neat USB soldering iron.
Fun fact: this soldering iron is light, small and portable and can be plugged in a USB power bank so that you can solder on the go.

This kit is for more advance users. It comes with a set of MAKERbuino compatible hardware components, some wires and a breadboard.

You’ll get an i2c GPIO expander and a gyroscope & accelerometer module so that you can expand MAKERbuino’s hardware capabilities.

Building MAKERbuino is a great experience and we highly recommend you to try it out. Maybe you’ll get addicted to DIY electronics, who knows. Despite that, we understand that not everybody loves soldering and would like a MAKERbuino just to program games for it…. we respect that.
We’ll send you a fully functional assembled MAKERbuino so that you can get down to programming right away.

You want to organize a group MAKERbuino making party or a workshop, great!
We’ll help you out by providing our educational material, workshop plans, worksheets and the experience we’ve gained with organizing MAKERbuino test workshops.

MAKERbuino’s design is ready for manufacturing. The kits will be assembled at our headquarters in Croatia and controlled directly by us. We have sourced all the needed components and made deals with our components suppliers and PCB manufacturers.

Want to help this guys? Go to the official Kickstarter project page and back them up with some $$. This is a great gadget, and anyone can see how much work and effort they spent to make it. We should always support developers and their great work. I am 100% that next year, 3/10 techy people will own one MAKERbuino. Gadgets and games are still the most hot topic in nowadays and we never stop spending money on. I will definitely get one, and come back with a full review and maybe a programming tutorial.

2 Replies to “MAKERbuino – a DIY Game Console Arduino based”

Your information is secured